Why Do Candidates Pick IAS Instead Of IFS? 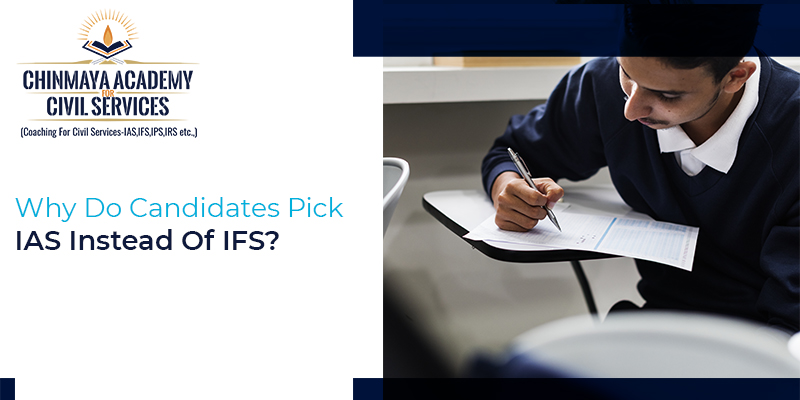 Let’s start with a fact that may surprise many of you: According to the results for UPSC exams 2020, 180 candidates were appointed for IAS posts and only 36 for IFS. Although both IAS and IFS are equally coveted jobs in the public arena, most UPSC candidates have an affinity for IAS or the Indian Administrative Service.

Why Is IAS Edging Out IFS In The UPSC Race?

Has the prospect of representing the Indian Government as an IFS Officer lost its sheen? Looks like it has because a majority of the UPSC aspirants pick IAS as their first preference. Statistics show that even the candidates within the first ten UPSC rankings are not lured by the glamour of serving in a foreign country.

To understand this disparity of choice between the equal rankings, we have to analyse the life and the jobs of IAS and IFS officers.

Life Of An IAS Officer

An IAS Officer’s job is all about staying in the country and serving its citizens. IAS officers spend the initial phases of their career in district headquarters and sub-divisional towns. Many of them have to relocate to rural or remote areas. Much of an IAS officer’s life is spent crisscrossing the country’s length and breadth as a part of their job. They will have to go to underdeveloped areas or areas affected by insurgencies that come within their district limits.

Life Of An IFS Officer

It may seem that an IFS officer leads a colourful, exciting, and luxurious life. For a good part, it is. They mostly reside in the capitals of the countries they serve. They are allotted grand houses with domestic staff. During the span of their career, IFS officers get to host and attend many parties. Above all, they do not have to handle meddling politicians like their IAS counterparts.

Going by these explanations, an IAS officer’s job may seem less attractive. Between hosting parties for diplomats and living in potentially-dangerous remote areas, it’s easy to see which is the popular choice. But the reality is far from what we think it is. Our further analysis explains why IAS is the top choice.

IAS Vs IFS: Which Is The Better Job?

To help you understand the popularity of IAS over IFS, we shall analyse their jobs based on three factors:

IAS officers are posted within India, allowing them to stay with their family and friends. The coveted job offers great opportunities in serving people right from the grass-roots level. Serving as an IAS officer is a great opportunity for aspirants who’ve longed to make an impact in society and improve people’s lives.

Above all, IAS is a permanent bureaucracy that remains politically apolitical and ensures the ruling party’s administrative continuity.

There’s more to an IFS posting than just the mere glamour of parties and posh residences. IFS Officers are posted in High Commissions and Indian Embassies around the world. They also hold posts in the Indian Ministry of External Offices in India.
They may have to relocate to underdeveloped, war-torn, hostile, or politically fragile nations. Therefore, they need to be mentally prepared for the job. IFS officers also need to put in a lot of hard work behind the parties and dinners they host for various diplomats. They are constantly under the scanner because they represent our country around the world.

As far as salary is concerned, IFS officers have the upper hand. Although IAS officers are also well-paid, IFS officers enjoy more allowances than their IAS counterparts. Officers posted in foreign nations get a special allowance which increases with the rise in grade and level.

IAS Officers are responsible for:

There is no correct answer to the question of which posting is better. It is important to remember that both services play pivotal roles in the country’s development. IAS and IFS Officers protect the interest of our nation in their own respective ways. Besides, the choice is entirely based on the candidate’s aptitude and interest.

That said, both IAS and IFS postings have immense benefits that you ought to know about.

When you become an IAS Officer, you enjoy the following benefits:

Above all, an IAS posting is a high-profile job with enviable security. No one can dismiss or fire an IAS officer without conducting extensive investigations and inquiries.

IFS Officers, on the other hand, also enjoy various perks such as:

IFS Officers in higher postings hold a red passport, and officials are given a white passport. Both are highly privileged diplomatic passports which make them eligible to use the special Diplomatic counter at airports.

The IAS and IFS are two distinct postings. Both are, without doubt, the most highly sought-after prestigious services most aspirants dream of achieving. Be wise and choose what’s ideal for you. Ultimately, being an officer of the Indian Civil Service is a dream that comes true.

Whether it is an IAS or IFS dream, we at Chinmaya Academy of Civil Services, Chennai, will help you nurture and achieve it with our exceptional training and coaching. Make the first step towards your civil service dreams by enrolling in our UPSC coaching centre. Swing by here to contact us.

Newspaper Editorials: How to Use Them for IAS Preparations
June 17, 2022

Everything You Should Know About the UPSC Interview Panel
June 9, 2022

The Judicious Use of Social Media for UPSC Preparations
December 10, 2021