The Fall of Afghanistan & Its Impact On Regional Geopolitics 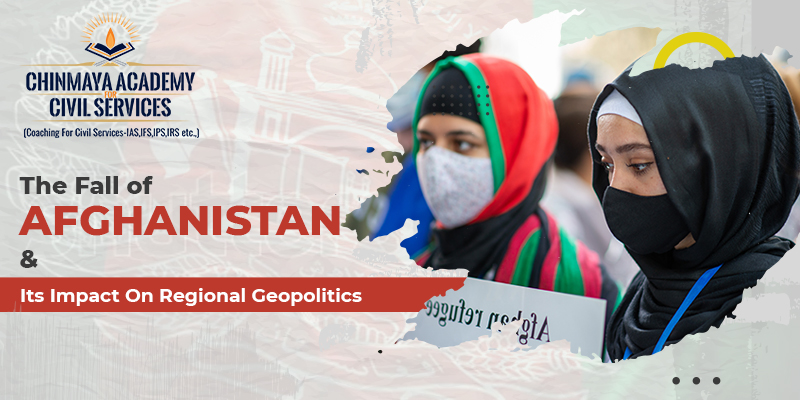 The US President Joe Biden made an announcement in 2021 that would set the stage for further historical events amid a raging pandemic. On April 14th, 2021, the President announced the withdrawal of the US troops from Afghanistan and set the deadline for September 11th.

The withdrawal draws the curtain for two decades of invasion, war, and conflict between the Afghan rebels and the US troops. As Kabul buckled in the wake of this withdrawal, the Taliban reinstated their control after 2 decades of war in Afghanistan. The fall of Kabul under the Taliban is a defining moment set to change the course of geopolitics in this region

Before exploring the implications of the withdrawal on regional geopolitics, let’s rewind the history that led to these events.

Unfolding The Historical Events Leading To The Afghan Insurgency

How did the Taliban regain control over Afghanistan? What led to the 20-year war? What is the root cause for this conflict that’s claimed millions of lives and displaced tens of thousands? We give you a brief glimpse into history that will reveal the answers to these questions.

Osama Bin Laden, the leader of Al-Qaeda, an Islamist terrorist group, launched multiple terror attacks on the USA on September 11th, 2001. The attack left more than 3000 dead and thousands missing.

Bin Laden was protected by the Taliban who refused to turn him over to the US Government. The US responded by launching airstrikes against Afghanistan a month after the 9/11 attacks.

The U.S. formed an alliance with NATO (North Atlantic Treaty Organization) and other nations like England, France, Australia, Canada, and the Netherlands. The Taliban were eventually overthrown.

The ousted Taliban became insurgent forces, launched deadly attacks over the years, and destabilised the Afghan governments that took over thereafter. A 20-year war ensued between the Taliban and the US-led forces.

In 2018 September, the negotiations commenced with the US-appointed envoy Zalmay Khalilzad and Taliban officials. The talks centred around the U.S. withdrawal from Afghanistan and the Taliban’s role in curbing international terrorist groups. The two opposing sides agreed to end the war after nine rounds of talks in Qatar.

Every US President who has been in power during the twenty years of the US-Taliban conflict has been under immense pressure to withdraw from Afghanistan. The sheer strain on financial and human resources was the main reason for the pressure.

The 4 Main Elements Of The US-Taliban Peace Talks

The US-Taliban negotiations that commenced in late 2018 went on till February 29th, 2020, culminating in both sides signing an agreement to bring peace to Afghanistan. These negotiations centred around four main elements:

Complete withdrawal of all the 14,000 US troops stationed in Afghanistan, to which both sides agreed.

Counter-terrorism assurances from the Taliban to prevent Afghanistan from being used by international terrorists. However, the negotiators disagreed over defining the terms “terrorist” and “terrorism”.

The intra-Afghan peace negotiations began in September 2020. The U.S. urged the Taliban and Afghan government to reach a consensus about post-war governance. However, the Taliban refused to negotiate with the government representatives without reaching a deal with the US.

The US  sought a comprehensive cease-fire before the peace deal, but the Taliban insisted on postponing it until the withdrawal of the US troops.

Blunders committed by the USA

The US-Taliban conflict is one of the longest and costliest wars that cost uncountable loss of life and trillions of dollars in expenses. Experts who have tracked the war have listed several mistakes the US made over the years that led to the recent developments. Here are the 3 grave mistakes the U.S. could’ve avoided:

The US invaded Afghanistan to war against terrorism without taking into account the country’s political history. The war demonstrates USA’s single-minded obsession with unipolarity. As the US troops withdraw from this inconclusive war, the Afghan citizens are once again left to deal with the atrocities of the Taliban.

When the US invaded Iraq in the 90s, it shifted its focus to Saddam Hussein. This gave the Taliban enough time to regroup and strengthen their forces with Pakistan’s help. In the 2000s, when Afghanistan was again put under the spotlight, there was mounting pressure in the US to stop the wars. Although the US gained victory in Iraq and Syria, the Taliban had by then become a force to reckon with.

With the atmosphere in Afghanistan still as fragile as ever, the US should have withdrawn gradually rather than make it so sudden and leave the Afghan citizens in the lurch. The sudden withdrawal has presented the Taliban with two “weapons” – Legitimacy and approval.  This gives them enough reason to bring the Afghan citizens under their stringent laws and wage and continue fighting against the Afghan internal forces.

What The Withdrawal Means For The US & Other Nations

As the US troops head back home, the impact of their exit will likely be felt in many countries that have strong ties to both nations.

The US exit will badly impact Afghanistan’s security and make the country more vulnerable to civil wars. As for the United States, experts view this deal as nothing more than a masked surrender that will help the Taliban regain power.

However, Pakistan will be the biggest benefactor of the US exit, as it has been in the Taliban’s good books for a long time. Following the launch of the China-Pakistan Economic Corridor (CPEC), Pakistan has become a protectorate state of China. Chinese projects like the Belt and Road Initiative may benefit from Pakistan’s influence on the Taliban.

As for Russia, its role as a peacemaker in Afghanistan and its growing ties with Pakistan may give Moscow a prominent role as the US leaves. Iran, which perceives both Afghanistan and Pakistan as threats, has been playing conducive on all sides. So there could be no imminent threat to Iran for now.

The US exit- What India can expect:

In the wake of the US withdrawal from Afghanistan, India faces a number of challenges:

With Afghanistan being ruled by the Taliban, it could be a big advantage to other anti-Indian terrorists operating in Jammu and Kashmir. They may increase their activities with the Taliban support.

India may likely shift its focus to securing its ties with the neighbours it has been ignoring for long, like Myanmar. The focus may also include the Indo-Pacific regions and other smaller neighbouring nations. Moreover, the Indian government may seek stability with Pakistan due to the developments in Afghanistan.

Afghanistan is led by the Taliban. Hence, regional counter-terrorism approaches are unlikely. Moreover, the Taliban can selectively target terror outfits present there or with whom they have relations. If they do, it will probably be for tactical reasons, for instance, to pit Pakistan against India.

China will enhance its efforts to bring every country except India onboard the Belt and Road Initiative, thereby transforming the geopolitics and economics of the region. Besides, India is highly dependent on China to fuel its economy and trade. Therefore, with the scales tipping in favour of China, India must reconcile with the country or face repercussions.

7 Reasons Why Afghanistan Is Important To India

India shares a historic relationship and deep cultural links with the war-torn nation. Beyond that, we list eight reasons that explain  why the Indo-Afghan tie is something you cannot ignore:

The new Afghan dynamic means that India will have to deal with the regional geopolitics on its own and reassert itself as a major player to countries like Russia and Iran. The nation cannot afford to carelessly create enemies or be too friendly. At the same time, it must reach out to smaller nations and make peace while it can.

At Chinmaya IAS Academy, Chennai, we impart in-depth study of the national and international current events. With many successful years as a reputed IAS coaching centre, we at CACS have what it takes to gear you for the IAS journey.  For further inquires about our coaching and admissions, please get in touch with our team.

Is your IAS coaching centre worth all the hype?
December 17, 2020

Choosing Between Online And Offline Coaching At Top IAS Academy In Chennai
November 10, 2020